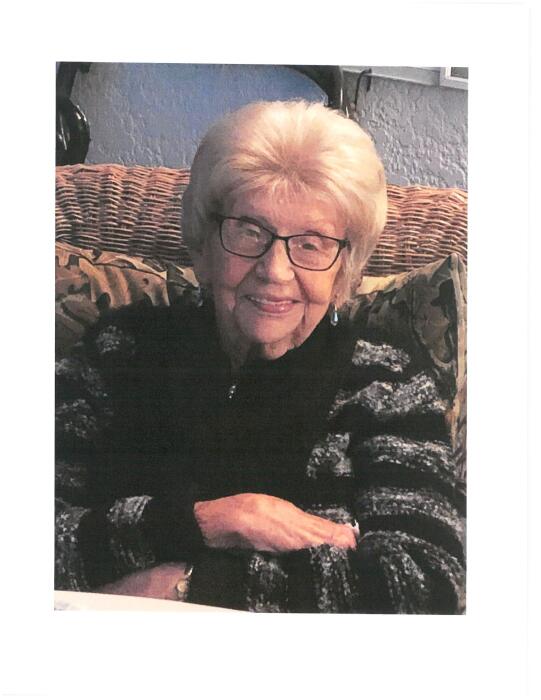 September 23, 1917 to September 6, 2020
Vona Ann Johnston (nee Bonnie LeClaire) passed away peacefully in the evening Sunday,
September 6, 2020 at Ridge Meadows hospital, Mapleridge, B.C.
Bonnie was born on the farm in West Wingham, near Cornation, Alberta on September
23, 1917 to Ralph and Anna LeClaire. She was raised with her brother Melvin and sister
Marjorie. She raised five children, Eddie, Joyce, Doreen, Raymond and Debbie.
She was predeceased by her parents, siblings and her two sons Eddie and Ray.
In her younger years, she enjoyed coyote hunting with her younger sister Marjorie.
Bonnie and her husband ran the BA gas station in Hanna and later moved to Calgary to
work at Calgary Motor Products as a car jockey. After a few years she managed the
MacLeod Motel in Calgary and saw her family grow.
She will be dearly missed by her children, Joyce, Doreen (Steve), Debbie (Gary), and
grandchildren Kory (Marilyn), Bonnie (Don), Steve (Brenda), Ricky, Robbie (Donna),
Amanda (Joe) and 15 great grandchildren, 7 great grandchildren and numerous nieces
and nephews.
As a youngster, she enjoyed using the old ‘24 Model A to bounce across the
prairie after gophers. Later in life she loved playing limit Texas Hold ‘Em at the casinos
near Pitt Meadows where she resided with her daughter. Once a visit to Lummi, with
Debbie, and Doreen, she won a bad beat with her daughter Debbie. Doreen was also
at the table to get paid minimum. A week before she passed she visited her granddaughters
cabin in Salmon Arm to spend time with the family on the beach.
We will all miss her but have very special memories of the strong wonderful person that
she was.