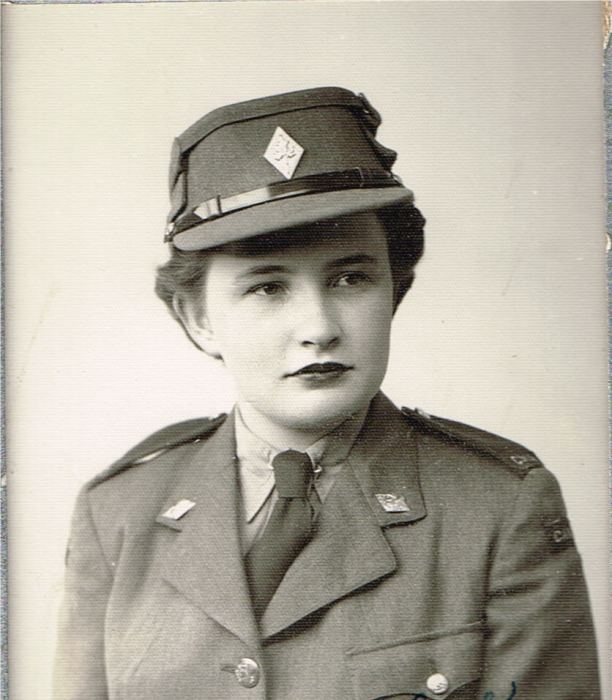 Valedeh “Joyce” Walker (née Codd) passed away peacefully at age 95 at Ridge Meadows Hospital, Maple Ridge, British Columbia, on Mothers’ Day, May 10, 2020, with her son, Gerry, and daughter-in-law, Lynne, at her side.

Joyce (“Val”) was born in Spear Hill, Manitoba on September 23, 1924 to parents Charles and Eva (Terry) Codd. Shortly after her birth, the family moved to Swan Lake, Manitoba, and when she was four years old to Kinistino, Saskatchewan, where she and her four sisters and two brothers grew up. Adventurous in spirit, at the age of 19, Joyce boarded the train to Regina, Saskatchewan, and joined the Canadian Women’s Army Corps with later positions and postings to Winnipeg (where she attended a course in stenography at Gordon Bell College), Calgary and Edmonton. After the war, she briefly married Roy Hawkeswood in 1947 and they had a daughter. Later, while personnel manager of civilian employees at the air force base in Edmonton, she met Jean (“John”) Gregoire, a radar technician in the Royal Canadian Airforce. They were married in 1950 and started a family while John was posted to the Canadian Forces Base in Trenton, Ontario, where their two sons were born. Upon John’s untimely passing in 1959, Joyce returned to Kinistino and, while raising her family, started yet another career, this time in banking, beginning as a clerk and ultimately as manager of the Scotiabank branch in Star City, Saskatchewan, from which she retired at age 62. Busy as she was during her banking career and ever civic-minded, she also found time to serve a few years as a councilor for the Town of Kinistino. In 1985 she married Allan Walker and they settled into retirement in Melfort, Saskatchewan, enjoying summer road trips in their RV. After Allan passed away in 2001, Joyce moved the following year to Maple Ridge, BC, to be closer to her son, Gerry, and his family. She took up residence in Panorama condominiums where she met many new friends and participated in the vibrant seniors’ community. She held positions on the strata council in her early years at Panorama, and until the onset of the current coronavirus pandemic, enjoyed various events and activities with the Ridge Meadows Seniors Society and Royal Canadian Legion, among others. During the Christmas holiday season, she especially enjoyed being Mrs. Claus to encourage donations to Seniors Helping Santa.

At this time of COVID-19 restrictions there will be no service. Those wishing to honour Joyce’s memory may do so through a donation to the Heart and Stroke Foundation of Canada, 110 – 1525 Carling Avenue, Ottawa, ON K1Z 8R9 or online at hsf.donorportal.ca.