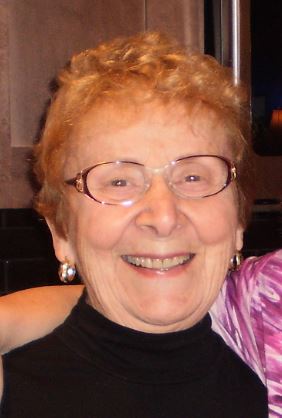 With great love, but heavy hearts, we announce the passing of Pat, our loving and devoted wife, mother, grandmother, and friend to all whose lives she touched, on January 31, 2021. She left us peacefully at the Maple Ridge Senior Village. She was in her 90th year.

Born in Saskatchewan, Canada, she spent her youth riding and jumping horses. She went water skiing on the lakes in summer and snow skiing on the “large” prairie hills in winter. She also excelled at playing the piano. She earned a Royal Conservatory of Music Associate Diploma (ARCT), and she played piano most of her life for the sheer enjoyment of it. She took a desk job at Imperial Esso, where she met a dashing young man named Bill Archibald who was working as a land surveyor. They dated for two years, then became husband and wife in 1956.

They lived in Arcola where they began to raise a family, which soon grew to four children by 1962. The oil industry had hit a downturn so they moved to British Columbia in 1963, settling in Maple Ridge. As their new location lacked oil fields, Bill took a job teaching in the local high schools.

Pat and Bill bought a beautiful 10 acre farm on 228th Street and the family raised horses, cattle, chickens and geese. The property had a lot of pear, apple and cherry trees, plus a meandering stream that wound its way past. The whole family enjoyed this home for the next two decades.

As an avid horsewoman, Pat taught pony club and gave riding lessons to the children in Maple Ridge. Later, she sold riding apparel and horse tack from Payton’s Tack Shack on 224th Street.

Pat and Bill bought their next house in 1985, a two-story home on two and-a-half acres with an in-ground pool on 102nd Avenue. This house became the focal point of many family gatherings, especially on hot summer days. Pat loved to spend the warm summer days lounging either in the pool or around the large pool deck. She had the joy of having her grandchildren come over and spend their days learning to swim with her.

Pat loved pottery, and had many prize pieces on display. She took up painting and belly-dancing, but one of her favorite pastimes was to sing in the church choir. She spent close to a decade practicing and participating in weekend concerts. Her first love was clearly music!

After two decades in their pool home, Pat and Bill found a perfect rancher on Zeron Street, which was better for Bill’s aging knees. Pat had rose gardens and a secluded patio with decorative vines all around. Pat enjoyed all the birds that visited, and they enjoyed and entertained lots of friends and family.

In 2015, Pat and Bill moved into Maple Ridge’s Greystone Manor, where they made great friends and were able to go on some wonderful day adventures. The staff there were incredible people who could make every day a new adventure for the residents.

In late 2016, mom moved into residential care at Maple Ridge Senior Village, with Bill following a month later. Again, they enjoyed great staff that took care of their every need. Pat would sit together with Bill, enjoying the entertainment provided and each other’s company. Even after Bill passed on, Pat could be found smiling and singing along to a familiar tune, remembering a life well lived.

Pat will be dearly missed by her loving family - daughters Kerry, Darcy (Bob), Shelley (Randi) and son Rob (Linda); and grandchildren Ryli, Nic, Danny, Megan and Kristen. Pat was predeceased by her husband Bill in 2020 and her sister Nancy in 1983.

Mom’s favorite song in her final years was “You Are My Sunshine.” Mom, you were our sunshine, too! Rest in peace.

What do you think?

Our thoughts and prayers are with the Archibald family at this time.
Pat was an incredible friend and employee at Payton’s Tack Shack. Our whole family spent many hours at Pony Club, Maple Ridge Riders, Pitt Meadows Playdays, Maple Ridge Fall Fair and numerous trail rides with the Archibald family. Pat always had a wonderful heartwarming smile, easy going demeanor and a great sense of humor.
We were very fortunate to call Pat and her family our friends and cherish all the wonderful memories we have from days gone by. Rest in Peace Pat and you will be missed by everyone who was lucky enough to meet you.
The Payton Family
(Eileen, Teri, Jamie, Susan, Mackenzie and Carson)