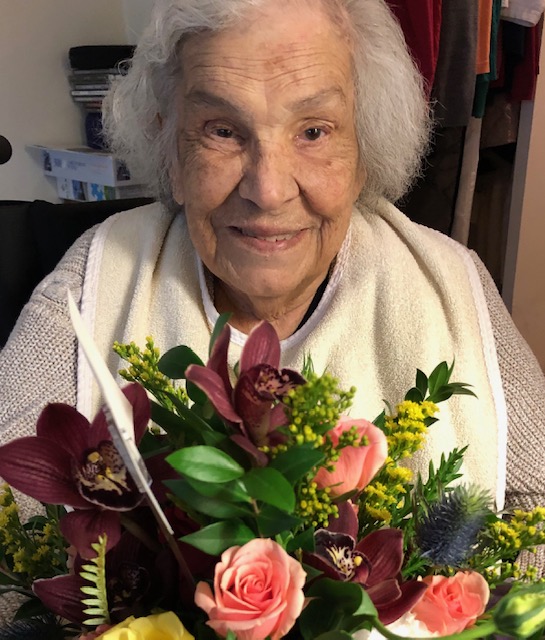 It is with great sadness that we announce the death of Isabelle Mikhail on March 18th 2020. Isabelle passed away with the early morning sun shining on her face, her hands being held by family in her room at the Lynn Valley Care Centre. Born (January 25th 1926) and raised in Egypt, Isabelle moved to Ireland with her two babies to accompany her husband who was studying at Trinity College. The family returned to Egypt for a couple of years, then moved on to Sheffield England for a few years before immigrating to Lethbridge, Alberta, Canada. After an initial transition period, Isabelle embraced her new life in Canada. She was an avid cook and started introducing other friends and faculty at the university to Middle Eastern food. Isabelle loved nothing more than to gather friends and family around a table of good food. She worked in security at Eatons and then later Woodwards. Isabelle also volunteered on the YWCA board and sang with the University of Lethbridge choir. She moved courageously to North Vancouver in her late 70s to start a new life where she made new friends and continued her love of travel with several of them.

Isabelle leaves behind her two daughters Carmen and May (Althea), her bother Pierre Malek, and her two grand-sons Kai (Amanda), and Spiery. She loved being Teta to her twin grand-sons since she herself tells many stories of raising her twin girls in those early years in Ireland. She is predeceased by her two sisters Rose and Antoinette as well as her brother Fawzi.

Our deepest gratitude goes to the staff at Lynn Valley Care Centre where they lovingly cared for our mother for the past 5 ½ years, especially over the past two weeks under difficult circumstances once the virus hit. There are angels who work there... your work doesn’t go unnoticed.

A gathering of family and friends will occur at a later date to celebrate Isabelle’s life.

I have fond memories of Isabelle during my years as pastor of Holy Trinity Roman Catholic Church in North Vancouver. I will never forget her radiant smile and devout faith. I can still picture her slowly walking up the ramp to the side door of the church and sitting in the front pews on the right people with mobility issues. Her great love of Jesus in the Eucharist was inspiring. I offered Mass for the repose of her soul on March 30. May rest in the peace and love her Lord.

My sincere condolences to those who were able to walk along With Isabelle during her time on Earth. I have a 92year old neighbour who is my dear friend. We both live alone and during this time of isolation our communication with each other is now more precious than ever. I know my neighbour has lived a full life and I fear for her at this time of crisis. She is constantly lifting my spirits with such a positive attitude. My heart goes out to the family and friends of Isabelle, May your memories be held in kind and gentle reflection.

Isabel will always be in our hearts. Love to the family.
Hala Georgi-LaCoste, Guy, and the boys Nanton, AB

My sympathy to you both, Carmen and Mae, on the passing of your Mother. She was an elegant lady and a superior cook. Love and prayers Esther Lambert

I was so sorry to learn of your mother’s death on the CBC last evening. My family remember many wonderful meals with your family. We were introduced to many new flavours. With love and prayers for you May, Carmen and your families.