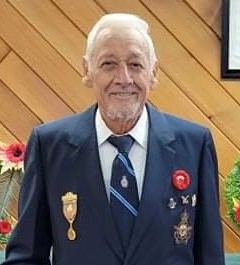 Ronald (Ron) Frederick Rowe passed away on February 9, 2022 after a short battle with cancer. He was born December 29, 1936 in Edmonton, Alberta, the youngest of four siblings. He is survived by his four sons, Mitchell, Brad, Scott and Richard as well as his step-daughter Joanne, eight grandchildren and eight great-grandchildren and his older brother Dick.

His family moved to Newton in October 1944 where they lived and worked on a dairy farm. At the age of 16 he began work as a Seaman; in 1953 on the Princess Patricia as a porter and then onto the S.S. Yukon Princess as a mess boy. He stayed at this until he enlisted in the Air Force in February 1954. He worked as an Airframe Technician and was honourably discharged February 14, 1957. Ron joined the Royal Canadian Legion in 1960 and remained a member until his passing, always remembering his fallen brothers and sisters on the 11th of November. It was while posted to Alberta he met his wife, Joyce. They were married quickly after they met and moved to BC. Their four boys were born there from 1957 to 1963. Ron worked at many different employers, Potters Distillery, MacMillan Bloedel Plywood and Delta School Board to name a few. After his divorce from Joyce, Ron moved into Richmond and got a job as a maintenance worker for the Richmond Inn. He met his second partner, Joannie Millar in the early 80’s. They spent many years together and although they decided they were better apart they remained good friends until Joannie’s passing in 2019. It was in Richmond where he spent the last half of his life. His great passion was gardening, having one at his home in Richmond as well as in Rock Creek where his cousin lived. He also assisted the neighbours in his complex with their gardens and minor repairs. For years Ron acted as a ‘support’ for his good friend Hoppy, caring for his garden, taking him for appointments and daily lunches at Legend’s Pub in Richmond where they were know as ‘The Legends of Legends’!

You will be missed by all of us lucky to have known you. Rest in peace Ron.