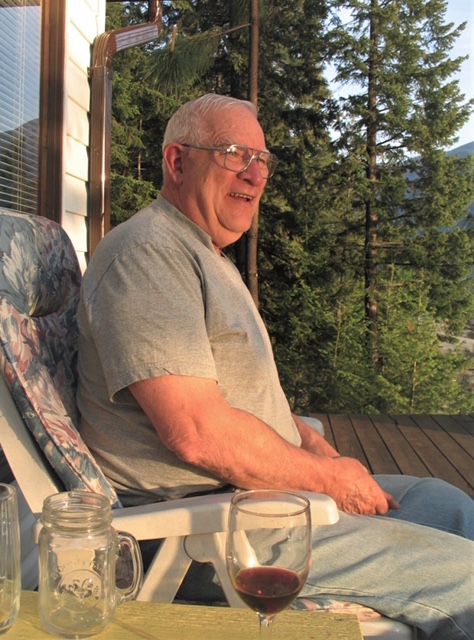 Passed away in the loving arms of family and friends in Royal Columbian Hospital.

Ron fought a long and courageous battle against overwhelming challenges. Predeceased by his parents, two brothers Richard and Norman and his son Blair. Survived by his sister Joy. Lovingly cherished by his wife Andree, children Moniqua, Craig, Michelle, Gina and James along with 13 grand children and 2 great grandchildren. Fondly remembered by numerous nieces nephews and family friends. Born in the Kootenays loving the great outdoors, spending as much time as possible on the Arrow lakes finding new adventures with his cousin Larry. A skilled athlete and the passion for basketball naturally led Ron into coaching. Ron excelled in this area and motivated his team to win the 1960 - 61 provincial boys triple A Basketball championship. Ron had a long and distinguished career in public education where he formed lasting relationships with colleagues, many who became lifelong friends. His Italian heritage was front and centre in his life, cooking, making homemade wine, trips to Commercial Drive for authentic ingredients and gatherings at the Italian Cultural Centre were cherished traditions. Family celebrations and summers at the lake made Ron’s life complete. Honesty Loyalty and Integrity guided Ron’s compass throughout his life.

When circumstances allow plans for a memorial will be announced.

With love and condolences for your loss Andre, Terry & Ron
June 5th, 2020

A Memorial Tree was ordered in memory of Ron D'Andrea by With love and condolences for your loss Andre, Terry & Ron .

"How silent the
trees, their poetry
being of themselves
only"

We will remember Ron as always wanting and working for the best for students.
With love and condolences for your loss Andre, Terry & Ron

A Memorial Tree was ordered in memory of Ron D'Andrea by With love, Norm and Karen Moore.

To Andre'e, all of Ron's children and their families,

Wishing you peace to bring comfort, courage to face the days ahead and loving memories to forever hold in your hearts and bring you smiles.
With love, Norm and Karen Moore

To my favorite boss, the master of the budget,
Thank you for your honesty, caring support, encouragement and above all "respect". You changed my life in many ways. I will miss you but your wisdom will always be with me.
Carol Soltesz

Heather, Shelley, Bruce and Maria and our partners and families.
May 26th, 2020

A Memorial Tree was ordered in memory of Ron D'Andrea by Heather, Shelley, Bruce and Maria and our partners and families..

We dedicate this tree to Ron D'Andrea. We were all recipients of Ron's leadership, wisdom and mentorship. Most importantly, Ron was a wonderful friend to us all and to our families.
Heather, Shelley, Bruce and Maria and our partners and families.

Ron,
You were good man and a great boss with tremendous integrity. You said what you meant and you meant what you said. I’ll always remember whenever we had an initiative. “Go ahead. Just don’t screw up” so much trust, Albeit you knew he was the boss!
Sta mi ben,
Kim

A Memorial Tree was ordered in memory of Ron D'Andrea by Georgia and Norm Nieken and family.

For Ron the lover and keeper of family and forest...all the love and green that is alive with him and his family.
Georgia and Norm Nieken and family

Two Memorial Trees were ordered in memory of Ron D'Andrea by Debbie & Wayne.

We will remember Ron and smile at the lovely memories.
Debbie & Wayne

A Memorial Tree was ordered in memory of Ron D'Andrea by Sue Wagner.

In memory and thanks for the life of a wonderful principal and leader at both Garibaldi and Maple Ridge Secondary Schools. Ron and his wife, Andree, were kind and loyal friends.
Sue Wagner

Lost a close family friend who will be missed but definitely not forgotten. Our world needs more Rons. People who are loyal, caring and can be relied upon to do the right thing. Great job buddy - you set the standard.