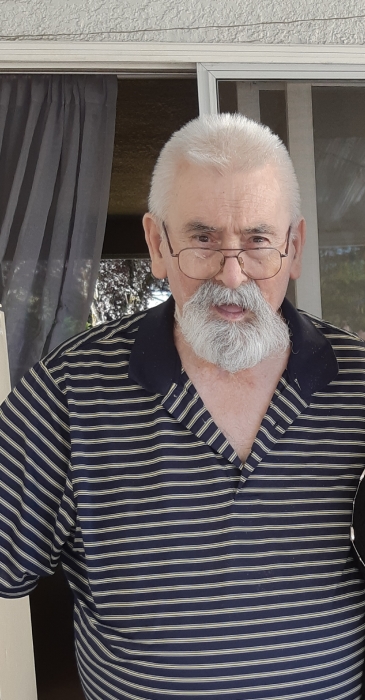 Roger was passionate about hunting, boxing, cars, and music. Roger was a hardworking man who spent the last 25 years as a resident manager in New Westminster, B.C. In his spare time he enjoyed spending time with his family, watching tv, especially wrestling, and eating good food.

Roger was extremely proud of his 2 children, Rose–Anna and Kenny Leblanc. He is survived by his wife and best friend of 53 years Eileen Lillian LeBlanc. Grandchildren Jacqueline Salahub and Sheylinn Strangways. His brother's Leonard and Ronald(Jake) LeBlanc.

Roger touched many people's life with his kindness and laughter. He was a great man who will be sorely missed by many.

Dad. I miss u so much.I miss all your stories. Your smiles every day i came home.Im sure you dont miss my pink chicken.I know all the puppies miss you.It was an honor and such a pleaser having you in my life.I wish i had more time. Thank you for letting me take care of you. I know you are in a better place. I miss you Dad . I love you with all my heart.

Pa I don’t know where to start on how much I miss you and love. I still can’t believe that you are gone. I can still hear your voice. You were amazing great grandpa they are truly gonna miss you. I hope you are up there dancing,singing and enjoying life. Until we meet again pa love you always your little porkchop.

Dad you are missed beyond words. Your love and strength is helping me through this most difficult time. I miss your laugh, your smile, and your presence in my life. I think of you every minute of every day. I think how happy Mickey must of been to see you. I hope you are singing to all the Angel's in heaven. God is lucky to have you! May you now rest in peace Daddy. I love you and I feel your with me all the time. Thank you for being the best Dad ever.

Very sad to hear about my uncle's passing. I have very fond memories of him when he lived in Moncton, and my sincere condolences to the family.

I very much appreciated the opportunity to meet you and to listen to the stories that you shared and the laughter you brought to the lives of others. Your love and devotion to your wife, children and grandchildren was admirable and did not go unnoticed by others.

My condolences Rose, I know he was your best friend,you will always be daddy's little girl and you've made him ro proud.

Love and miss you Dad

You were the one constant man in my life, a man who embodied strength, humour, encouragement and love. I will forever cherish our memories, your unsolicited wisdom, your love affair with orange pop, and the sound of your laugh. I can not put into words just how much you meant to me and the imprint you made on my life. I am beyond blessed and privlaged to call you MY grandpa! You will be deeply missed and endlessly celebrated. May you always watch over protect me. I love you to the moon and past all the star in the sky 💜
Jacqueline

Roger, you were a man with a kind heart and always had a face filled with smiles and laughs. You will be dearly missed. Thank you for all of the laughs you shared with me.
Sending my sincerest condolences to Rose and family, my heart goes out to each of you in this time of sorrow.