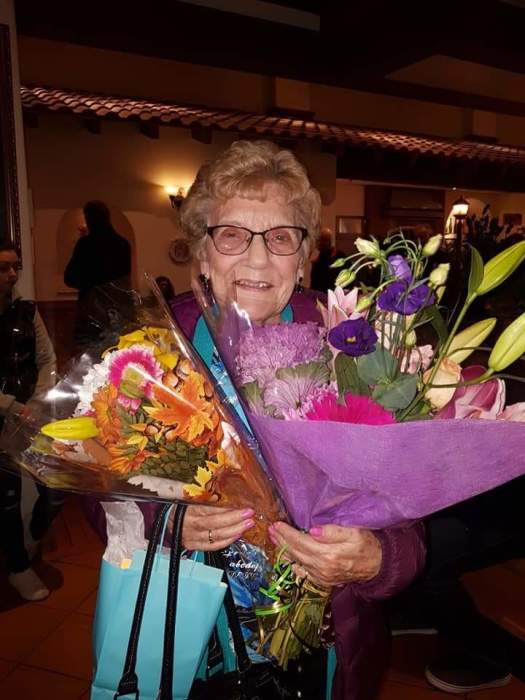 Joan (Joanie) Millar “The Wild Irish Rose”Joan Millar was born, Joan Kernohan in the beautiful little village of Kells just outside of Ballymena, Co. Antrim in Northern Ireland October 26, 1937.She departed this life in her home in Langley, British Columbia, Canada due to heart failure on the evening of a Celtic festival known as “Samhain”, pronounced (sow-win), All Hollow’s Eve (Halloween), October 31, 2019 with a great display of fireworks (Mom always said she wanted to go out with bang and was probably singing a song to herself). She is survived by her 3 children, William Ian, Robert Hugh (Roy) and Joanne Elizabeth, her son-in-law Larry and daughter-in-law Anita. Joe Millar (ex-husband & best friend) brothers Roy, George, Bruce and sister Wilma. Grandchildren; Ashley, Melissa, Jenny, Alyssa and Linden and great grandson, Jaxon.There’s so much that can be said about Joan (Kernohan) Millar, of all that she had done in her life and all that she had achieved. (Book and HBO special on the way ~ wink, wink). She was a loving mother, housewife, the “Queen of Shuffleboard” and “Hall of Famer”, a caregiver, (she cared for so many even when she was suffering herself). A (great) Irish dancer, (an Irish Dancers on the first Irish Rovers T.V. series on CBC) and an entertainer (the life of the party who always had song).Mom, you have touched the heart and souls of so many people in this world. May God hold you in the palm of his hands and close to his heart (At least for a little while before you find a pub, and you’ll probably sing “There was a Little Fly” and “He’s Got No Falorum” just to embarrass the hell out of him). This world could use more people like you. Your loving heart and soul will be greatly and deeply missed You are no longer in pain, Rest in Peace. Celebration of Life will be held February 8, 2020 at 1:00pm at

In lieu of flowers and donations a Go Fund me page has been set up to help with expenses and to take Joanie back to Ireland for a traditional Irish wake. Visit gf.me/u/whbku5 to donate.

Please know my thoughts are with your family.I have many fond memories of fun times spent with Joanie . Rest In Peace 🌹
Irene Evans Regina Sask

Miss you so much Mommy. My heart aches everyday.

I can never forget your bubbly personality and all the fun playing shuffleboard in the "old" Kerrisdale" Legion.
I am sure you will be sliding hangers up above.
Rest in peace (in between games)
Gerry Poole

Beautiful lady...it has been mine and Rico's pleasure to have known you...spend time with you, dine with you and play shuffleboard with you.
No one will be able to talk about board without including you in all the memorable stories.
We will truly miss you and your antics!
Keep the party going in your new home.
Rest in Peace” Wild Irish Rose” 💞🌹🍀🌹🍀🌹 💞